In Tribute to Peter C. Moore 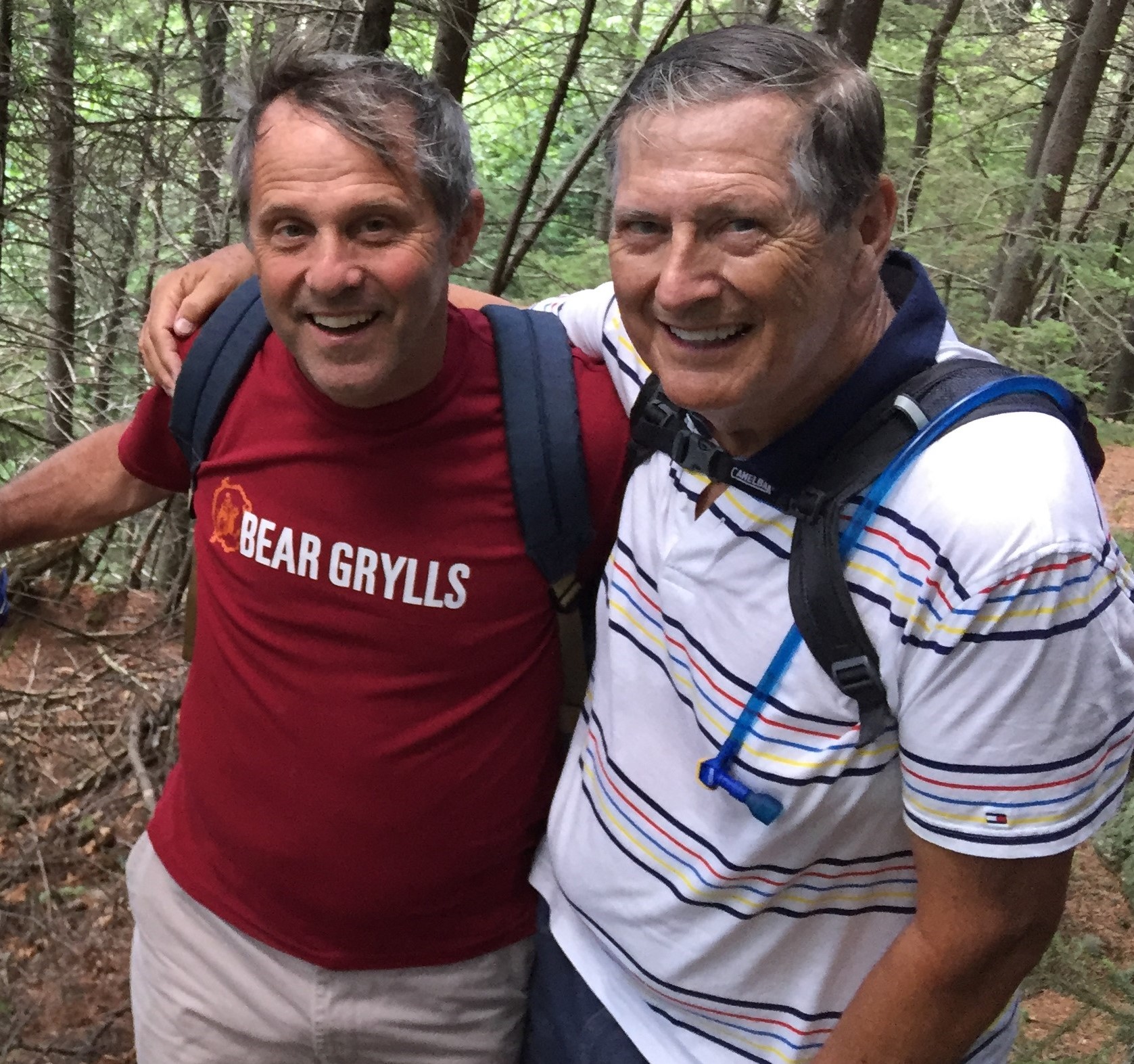 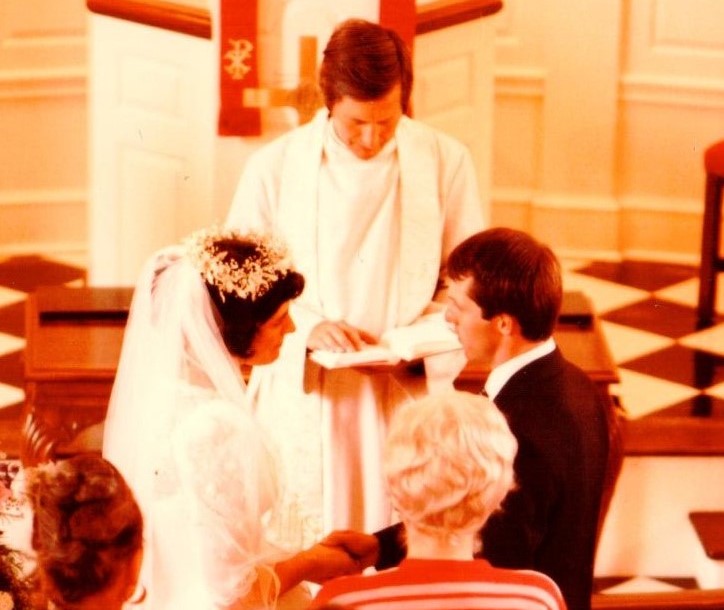 Peter performing the wedding of Dan and Leslea Walker in 1984

It is with great sorrow that I share with you the news of the Reverend Dr. Peter C. Moore’s passing. Peter died on May 30, 2020, at the Roper Hospice Cottage in Mt. Pleasant, South Carolina, after a battle with cancer.

Having founded FOCUS in 1961, Peter served as Executive Director until 1986, and again from 2005 to 2008. For 60 years, he served as a visionary, a mentor, a practical theologian of ministry to independent schools, and a dear friend to many of us. For me, he was a kind of father figure.

I can keenly remember as a FOCUS volunteer when, sitting on the porch of the Lodge at the Study Center, Peter would make a point of saying, “Hey, let’s take a walk.” Little did he know how important those walks were to a young man who was struggling to find his way. My many walks with Peter along Lambert’s Cove Road 40 years ago – and later, our annual tradition of hiking the mountains of New Hampshire – have symbolic significance. Peter taught me what it means to truly walk in relationships over a long period of time, to engage (and re-engage) through the ups and downs and unexpected turns of life.

When Leslea and I decided to marry, it was naturally Peter to whom we turned for pre-marital counseling and to officiate our wedding. In the years that followed, what I grew to appreciate most about Peter was not his “perfect example,” but rather his transparency about his own short-comings and his daily need for God. This became a model for me as I assumed leadership of the organization he had established decades earlier.

A link to Peter’s obituary is below. I know I am not alone in grieving the loss of this dynamic yet humble minister of the gospel who helped transform countless lives. Personal tributes are being prepared by several former members of our staff and board, and others in the FOCUS community are encouraged to share their reflections via social media.

In the meantime, please join us in giving thanks for Peter’s legacy to FOCUS and in praying for his wife, Sandra, and their family.

It is impossible for me to overstate how deeply I am indebted to Peter Moore.

I first saw him in the summer of 1963 when I was thirteen. He was talking about God with characteristic clarity and poise by the pool at Reed and Audrey Clark’s home on Long Island, not far from the Greenvale School where I was a student.

I had no inkling at the time of the impact Peter would have on kids like me. Peter knew that to reach the independent school world he would have to raise up a community of leaders who could make Christ interesting by their teaching, smarts, humor, example, and love. This he did with single-minded dedication and astonishing effectiveness. Thanks to Peter, thousands of young people like me met Christ, learned how to talk about him to others, made long-standing friendships (I met my wife-to-be at FOCUS), and grew up to see their children’s faith kindled and formed. Hundreds of us found our way into vocational Christian service. And along the way (crucially important) we laughed a lot, thanks to the fun and creative people Peter gathered around him: I actually got to lip-sync Bernstein’s “I Feel Pretty” with Peter (and was it John Howe and Dick Keyes?) “singing” backup in outlandish costume.

Rare among parachurch leaders, Peter showed young leaders like me how to love the church, both in its denominational specificity and universality. In the Episcopal Church, he served and sought renewal as a parish priest and as Dean of Trinity Episcopal School for Ministry. But he also welcomed into the FOCUS orbit people from all over. When I chose to be trained in a Presbyterian seminary, he still warmly received me on the FOCUS staff and into other leadership roles.

It is with deep and lasting grief and gratefulness that I write in honor of Peter Moore and his legacy in our church and world. With a passion to see young men and women engage their leadership and ministry potential, he founded three organizations that worked toward that end: FOCUS, Trinity School for Ministry, and Anglican Leadership Institute. He influenced dozens of emerging leaders to heed a call to full-time Christian ministry, both lay and ordained. Peter’s goal was to uphold the authority of Scripture, to build up the body of Christ through a biblical worldview, and to bear witness to the effectiveness of Christ’s death on the cross.

His deep faith in Jesus Christ and Christ’s mission on earth drove Peter to ask how the unbeliever saw things. He avoided the “church view,” but instead dove deeply into the mind of the questioner or seeker of truth, whether in the New England Boarding Schools, the Episcopal Church, or around the globe. He did his ministry one-on-one — taking time to listen, shape, and mold individuals, while respecting their ability to make their own decisions when presented with the facts of the gospel. Peter believed that godly leaders produce followers, take time to raise up other leaders, share leadership, and are humble and genuinely God-centered.

Peter loved to teach. Time and again he turned to evangelical Anglicans in the UK (men like John Stott, Jim Packer, and Michael Green) to help ground his theology, which helped him become a catalyst for personal and institutional renewal. His Anglican Leadership Institute has reached more than one hundred Christian leaders from nearly 30 countries. These men and women came to have their lives and theologies deepened by Peter and the ALI faculty, and they imbibed the hospitality, generosity of spirit, kindness, care, dignity, and humility that come from spending four weeks together in a learning environment.

Peter has shaped a new generation of Christian leaders. The lasting effect of his ministry will grow more apparent in the days ahead, as leaders follow Peter’s example and continue to renew the world for Christ.

I am honored and grateful to be invited to write this tribute to Peter Moore. I only wish I had more space… much more!

I arrived at FOCUS in the mid-’70s. The office was in Sandra and Peter’s basement in Stamford, and the staff numbered fewer than a dozen. It was an exciting time, as we had to depend on the Lord’s provision a lot.

Peter accepted Jesus as a boy at St. Mark’s School and soon longed for a more compelling presentation of the gospel in boarding school chapel services. He went to Yale, then Oxford, where he encountered the “Bash camps,” Christian camps for boys who attended England’s top boarding schools. That inspired Peter to start a similar endeavor here. His early efforts eventually morphed into FOCUS, which was originally intended for students in New England boarding schools, in the knowledge that these students often wound up in positions of notable influence. With amazing courage, energy, determination, and drive, he accumulated a few helpers and started holding “sleep-away” weekends and more. In those days boarding schools were usually single-sex, so many students jumped at the idea of a weekend away with students of the opposite sex. It worked.

From the beginning, Peter’s vision was to make these students as comfortable as possible on their own terms (lifestyle-wise), hence ski weekends, adventures in the Adirondacks, a drop-in house on the Vineyard, summer programs on Long Island, and more. Again, by God’s grace, manifested in Peter’s vision and drive, it worked. And look what it is today!

Peter prayed a lot, and he had a wonderful way of drawing other gifted and accomplished people into his work: faculty, staff, volunteers, supporters, and more. His boundless energy was quite remarkable, right up to the end of his life. Nothing would stop him from working to advance the cause of Christ. He had a vision (several, actually) of what he wanted to do, and he worked tirelessly until, by God’s grace, he did it.

A most remarkable man, enormously used by God. Hallelujah for the life of Peter Moore!

I was a junior in high school the night Peter Moore joined our family for dinner at our Pittsburgh home. When asked by my father what he would like to do with his life, Peter’s eyes lit up: “I would most love to start a ministry which would share the gospel with prep school kids like myself when I was at St. Mark’s.” Peter understood what it was like to be an unbeliever, to question whether God was relatable — or even real. But during boarding school he had experienced the love of God in Christ and had an unwavering desire to bring others to know Him too. Blessed with natural energy, a rare ability to write and speak well, an inquiring mind, and a deep love for people, Peter was a networker like no other. These gifts enabled him to put together FOCUS, with which I eventually became intimately involved.

Great as Peter’s organizational gifts were, it was his friendship and personal encouragement which burrowed into my soul and made me the person I am today. Whether in a theological conversation (in which he had the upper hand) or asking what God was up to in the hard places of my life, he continually nurtured our friendship — no matter how often or how seldom we saw one another.

I was privileged to be a FOCUS Trustee during the early 2000s. Peter encouraged Tom and me to pray that a FOCUS work might spring up in the Bay Area “someday.” Pray we did, and in the fall of 2013, a fervent group of families committed to launching FOCUS San Francisco. At the heart of this endeavor was the overflowing faithfulness of the same man who had sat in my family’s living room some 50 years earlier.

There are no adequate words to express how much I shall miss this matchless friend. The loss of his presence here does nothing but make heaven that much more appealing.

From the Executive Director